A year of demolition and renewal


Plants were beginning to grow. Then, without warning demolition equipment moved in and demolished the station landing,steps and concrete ramp. Our plants under the station and ramp went too!
Ros, Eric and Meegan met with the Metro engineers in charge of the demolition to discuss the cleanup of the site.One of the demolition gang suggested that instead of digging out the metal supports sticking out of the ground he could level them with an angle grinder and use them to support a retaining wall capped with a sleeper seat. This creative solution was quickly realized.
For years the low, blue stone retaining wall along the footpath had been missing its capping.Eric Keys approached Metro Trains who were quite willing to repair the wall using blue stone blocks supplied by MVCC.On the day work was to take place, the blue stone did not appear. After a phone call from Eric and swift action by MVCC's Sharon Keppel, within an hour everything was sorted.It was a great to see how quickly and smoothly the matter was resolved, the blocks provided and wall repaired.
Where the ramp had been,the ground was badly compacted so we improved the soil with liquid clay-breaker and laid mulch before planting more tube plants supplied by MVCC Parks and Gardens.
By October a section of the remaining sleeper retaining wall had collapsed. Using reclaimed bridge timber, Eric Keyes,assisted by Robert,installed a new retainer to match the existing timbers. 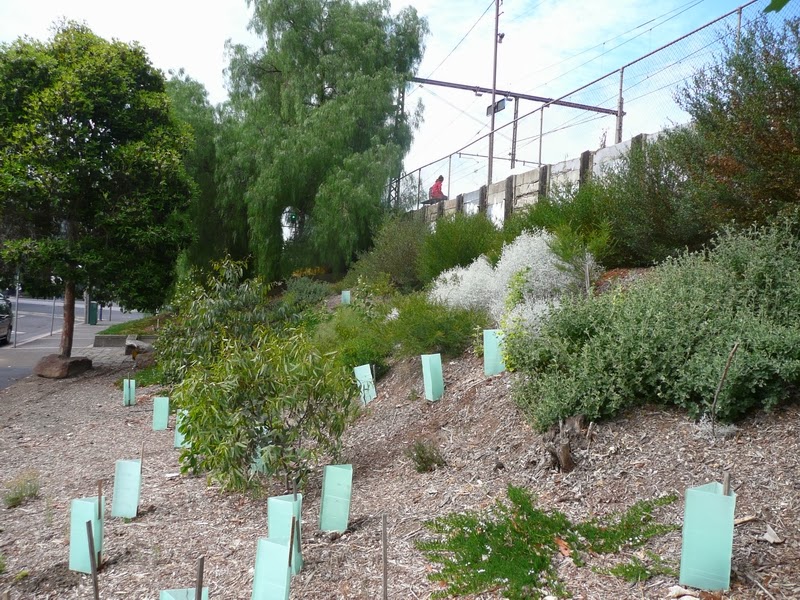 By the end of 2013 the plants from the previous year had put on good growth after a wet winter and we were beginning to see rewards after three years of hard work.