September 18th Working Bee:
We haven't had a working bee since May when we took part in the Keep Victoria Beautiful Biodiversity on Pin Oak Festival. That was a very wet day but enjoyable as it was a celebration involving cake and coffee rather than a working bee. Since then weeds, particularly annoying Burr Medic had taken hold in the disturbed soil from our April planting of Dianella laevis on the steep slope south of the station building below the metal support beam.
Yesterday there were six people in attendance at our working bee: Roger’s deep watering, saved the excellent but thirsty new plants donated by the Moonee Valley Council as part of the seating landscaping. Whilst Roger was busy with the hose down the other end and Ed and Margaret were taking care of litter and weeds, Christine, Thomas and I (later joined by Margaret) concentrated on weeding and inter planting the Dianella laevis near and around the pit south of the Station building. Today we planted 9 x “Sticky Everlasting Daisy” seedlings 3x “Ruby Salt-bushes” and 1x Westringia fruticosa. All the plants we planted today were home-grown and free but planted in $5 holes.We added Zoo Compost to each planting hole and mulched with sugar cane mulch.
We also planted 1x "Wonga- Wonga" vine (under a poplar) and 2x Golden Everlasting paper daisies (near the steps) grown from seeds distributed to members by APS Vic; but our “Golden” Everlastings are pink! I grew the Sticky Everlasting seedlings from seed supplied by KVB at the Biodiversity on Pin Oak event that our Stationeers group participated in with Keep Victoria Beautiful last May. The seeds I planted all germinated and ten seedlings survived over winter. Roger also raised five plants from his packet of seeds. We are hoping the daisies will be in flower by the time of the Flemington/ Kensington Community Arts Festival next month.
Posted by Rosnata at 10:56 No comments: 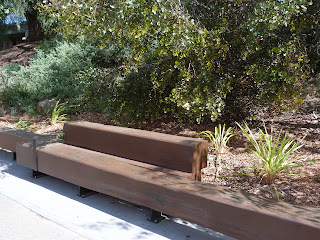 New Seating
Since our last working bee, the landscaped seating area has been completed. Moonee Valley Council’s senior landscape architect Rui Seguchi-Vos’ design is both sensitive and practical and we are very pleased. Her landscape design did not destroy the plants we had already in place and she chose the same plants that we used elsewhere on the embankment for the new planting. There is a continuity with the park on the other side of the Station. Moonee Valley Council paid for and contracted the work on the seating area. People are already using the seats for a quiet rest. Comment: “It’s nice to be able to lean your back up against a support”. The back rests will double as additional seating when a crowd is seated to watch the performances at  the Flemington & Kensington Community Arts and Culture Festival in October.
Posted by Rosnata at 10:25 No comments: